49 year old vines grow thick and gnarled in the lean soils covering a gentle slope of a high valley in the Central Ranges. Mudgee’s climate is perfectly suited to the cultivation of wine grapes – very cold winters give way to warm days and cool nights ideal for the development of elegant fruit flavours and super-fine tannins.

With the oversight of vineyard consultant Paul Baguley, Paul Winfield manages the vineyard and grounds at Huntington Estate. We prune, spray, slash and irrigate ourselves, and occasionally outsource the picking.

Managing the vineyard is a balancing act. Grape vines need to be challenged, and stressed to ripen a crop full of flavour, but not pushed over the edge. In addition to long term health considerations; in every season, canopy retention and keeping the vines operating is critical for ripening.

One of the keys to success at Huntington Estate is low yields. The vineyard is deliberately managed for yields of below 3 tonnes/hectare (well below industry norms), enabling vines to focus their energies on ripening a smaller crop of fruit.

The cost of production is high, but the result is superior fruit. Old vines make great wines and the 49 year old vines are at their optimal balance of quality and quantity of fruit produced. We are planting the old vines of the future now, and vineyard renewal is an ongoing exercise.

The entire vineyard is subject to irrigation, although it's used sparingly to supplement rainfall.

There are two large areas of nature reserve in the vineyards to encourage bio-diversity, and to house the resident mob of about 80 kangaroos, and all the wrens, parrots, kookaburras, rodents, reptiles, Boobook owls and the odd wombat. 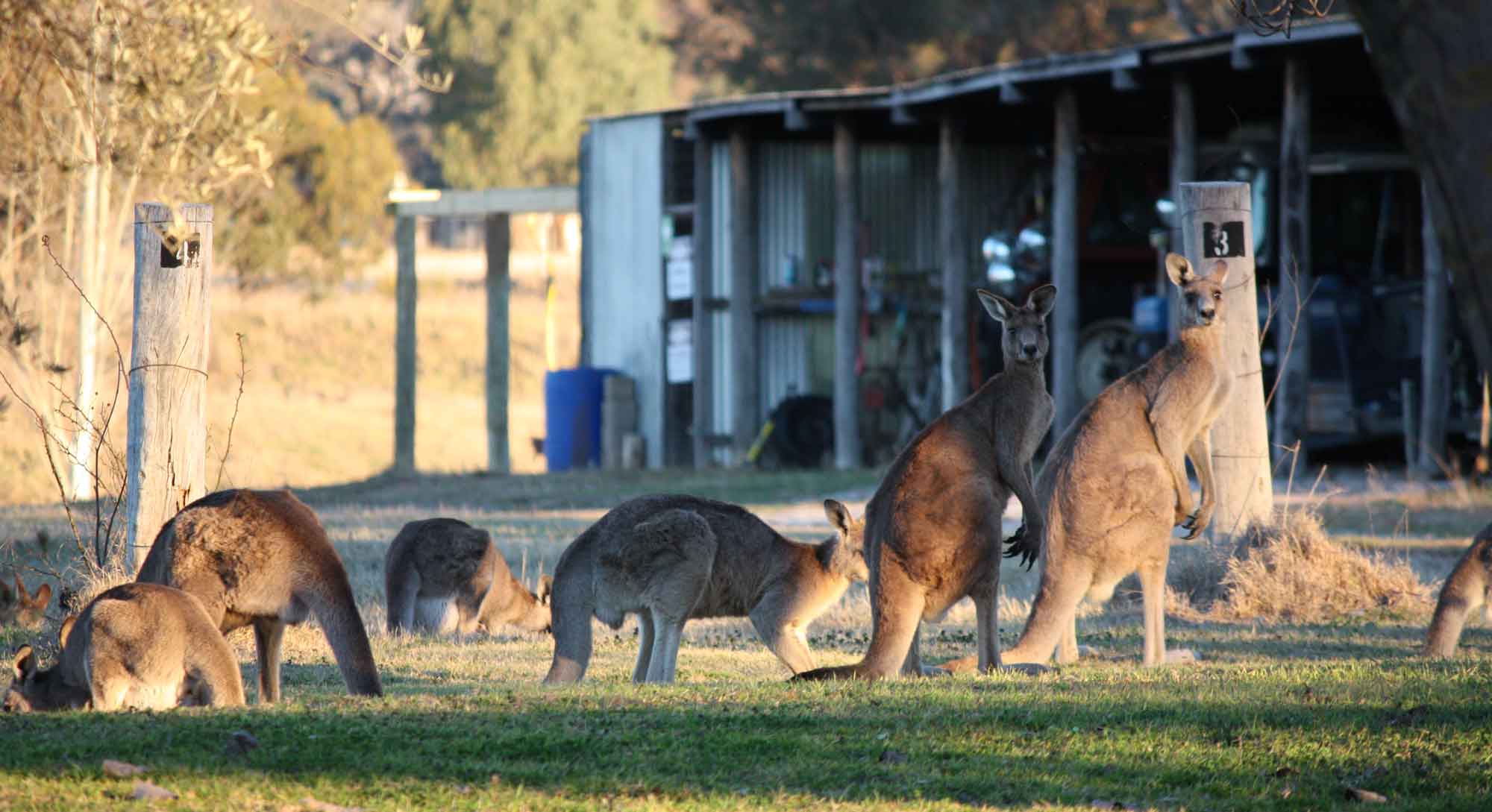 There are 24 separate varietal blocks within the 40 hectares of the Huntington Estate vineyard. Most soils are predominantly sandy loam sitting above well drained, permeable clay, although quality and type varies dramatically from block to block.

Many areas are quite gravelly thanks to some ancient river beds. The soil is not overly fertile, particularly the eastern half of the vineyard which is much leaner and on undulating slopes.

Most vines are now almost 50 years of age and hitting their prime in terms of quality. The clay sub-layer holds the key to the vines' performance. Good winter and spring rain usually fill up this layer. The vine roots are well embedded in the clay and during the dry summer and autumn period, they draw water from this zone.

Huntington Estate sits in the middle of Mudgee's “golden circle” of vineyards and relies on cool nights and clear days for the grapes to fully ripen. Below is a summary of some of the vineyard blocks at Huntington Estate.

Just after the middle of the last century Bob Roberts sold the family cow, armed himself with enthusiasm and passion, and took his new bride over the Blue Mountains to Mudgee where he chose his first site. Imaginatively, this site was called Block 1. Block 1 has deep clay loams that retain moisture. This was important as all the plantings at the time were dry-land. The resulting fruit from Block 1 has consistently made Huntington's Special Reserve Shiraz. Block 1 now produces wines that are very varietal and generous in character with chocolate and dark berry flavours. 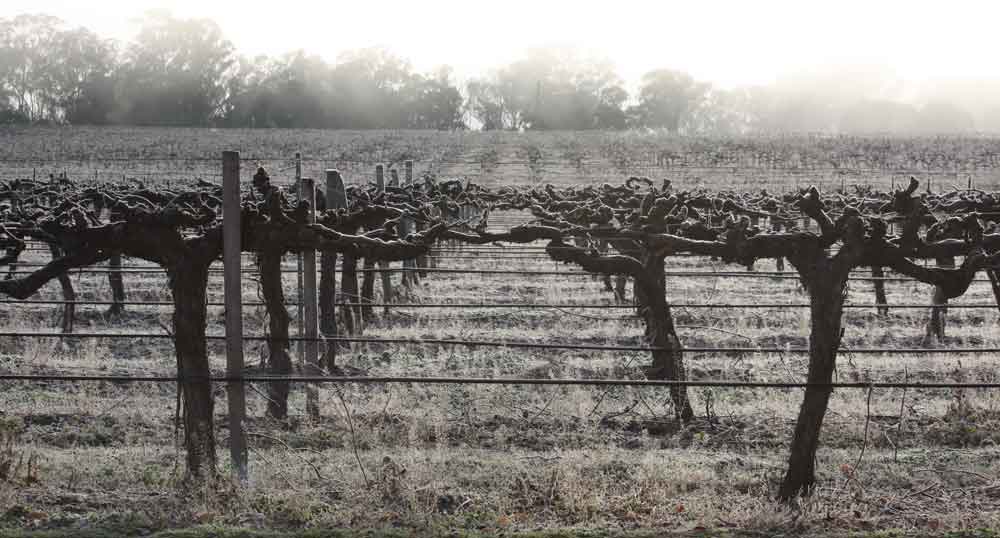 In 1969 Bob discovered that Block 2 was also ideal for Shiraz as it was higher than others and had soils that were red loam over iron stone and quartz. Deep down was a clay base, ideal for retaining moisture. At the top of the vineyard the soils turned to deep gravel over iron stone. This produced lower yielding vines, however the flavours are much more intense as the berries remain small and the juice is concentrated.

Since the early days this block has consistently made Huntington’s Special Reserve range.

Len Evans commented in 1974 on the Shiraz from Block 2 as being “honest, straight forward with big Shiraz fruit and all the blood and guts of the area”.

Block 2 now produces wines that are floral, elegant and rich.

This was the first block planted on the lower slopes on the Western half of the Huntington Estate vineyards. More Shiraz was needed to keep up with growing demand and this site was perfect as the soils here are loam over clay. The layers are free-draining, an essential element for quality Shiraz. Block 4 produces wines with strong spice flavours and excellent varietal characters.

Searching for the perfect Cabernet Sauvignon soils in 1969, Bob Roberts chose the area on the North Eastern corner of Huntington Estate. The resulting wine vindicated Bob's decision to plant on this site as the fruit ripened early and to this day is harvested before all the earlier ripening Shiraz has been harvested.

The wines from Block 3 have won numerous awards over the last 35 years and have proven that Mudgee can grow the best Cabernet Sauvignon in Australia.

Prominent wine writer Huon Hooke has described Mudgee as one of the three most important regions for Cabernet in Australia.

New Owner and Winemaker Tim Stevens is convinced that Block 3 is destined to be more widely recognized as one of the great Cabernet vineyards in Australia. “It produces fruit that makes wine that is highly varietal and aromatic with astoundingly fine tannins,” he said.

This block was planted in the early seventies on the lowest part of the property and every day planes fly low overhead as they take off and land nearby. In fact in the 1980’s a plane crash landed into Block 9. Luckily the pilot walked away. She reportedly forgot to close her door and while trying to shut it she hit the ground. She has been a loyal customer ever since.