“…take a few days of your life and absorb yourself in the world of musicians and their music-making…” Bob Roberts. Founder, Huntington Estate. 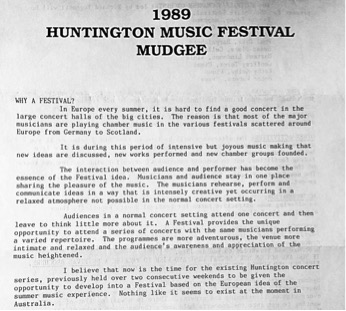 Bob Roberts wrote “I certainly had no inkling that our first “Music in the Winery” held in 1980 would or could develop into what it is today – the Huntington Music Festival.

It started on a Saturday night in October, with a group of young musicians from the ABC Sinfonia playing quartets and trios, some friends and Huntington wine patrons numbering one hundred. A sit-down dinner featured especially prepared local spring lamb, slow open-pit roasted, basted in salt, herbs and garlic, accompanied by asparagus picked that morning. The golden half-lambs were placed along the centre of the tables on white towelling; the guests were told to each bring a knife and they carved for themselves. The musicians were, of course, placed amongst the audience at the tables. We all had such a good time… that we just had to do it again.

Richard Tognetti returned from studying in Switzerland in 1989 and suggested the present format – eight concerts, one in the day and one at night, with the same audience, over four days. He and the Australian Chamber Orchestra would be the centrepiece… We were certain that the music would be marvellous… but would anyone come? ...We needn’t have worried – the response to our mailing list invitations was so overwhelming that we created the Prelude Weekend concerts to avoid disappointing so many people.”

The Festival flourished under the charismatic, bold and personal leadership of Bob Roberts and Richard Tognetti, delighting critics, audiences and musicians (Yvonne Kenny declared that she’d rather play Huntington than La Scala or any of the great Opera Houses of the world). Some of the best musicians in  the world have trodden the stage made of upturned wine crates and pallets. Tognetti wrote “People can travel at Huntington, travel across boundaries and be surprised with the implausible combinations of performers and music”.

In 2006, Tim Stevens and Musica Viva took over the mantle, determined to build on the foundation laid by the Roberts family, Richard Tognetti and the ACO, but also to evolve the event to secure its position at the pinnacle of Chamber Music Festivals in the 21st Century (mission accomplished said Emma Ayres in 2012, describing Huntington Estate as “One of the best chamber music Festivals in the world”.).

The programming under Carl Vine and Musica Viva focusses entirely on Chamber Music and her musicians, but is equally committed to the notion that a Festival must challenge the audience with new and different music alongside the presentation of the “classics”. The international focus is a key pillar of the Festival, bringing the finest global musicians to Mudgee to play with their Australian counterparts; as is the variety of music presented - within each year and from year to year.

Nicky Stevens attended her first Festival in 2007. In 2008, having moved to Australia from London a few weeks earlier to be with Tim, and in the knowledge that she would be responsible for the 2009 event, she conducted a customer survey to help form a plan. Having survived the audience backlash (lynch mobs were formed) over an “Un-Huntington” question about A-Reserve seating, set about making some tweaks to enhance the Festival experience, leaving Musica Viva and Carl to continue to work their magic with the music.

Changes to the format begin at ticketing, where loyalty is rewarded and while the ghastly phone-in scrum remains necessary (sorry), previous year’s attendees are at least guaranteed a seat, with first-in-best-dressed dictating the rest. We no longer make you stand to eat, or play musical chairs with fewer tables than people. Coffee is freshly made in plungers not boiled to death in urns, juice comes in flavours other than orange and water is fizzy as well as still… Loos are plentiful, the divine Sarah Ferris makes the place look magical every year, the air conditioner makes the hall bearable in the heat and and our wet weather contingency with marquees allows the audience to enjoy the full Festival experience whatever the weather. Let us know what other little things we can do better via the suggestions box in the Cellar Door.

“Noise is a health and safety issue at Huntington. This is because if you make too much of it during a concert Bob Roberts may kill you.”  The Kitchen Manual

For the first years of the Huntington Music Festival, Irene Tognetti (mother of Richard) catered for the visitors that attended. With a hose and bucket for a sink, and makeshift coolers, Irene and her team managed to serve great food.

Leading players in the Australian food industry have contributed to the great food at Huntington.

Peter Howard 1989 – 1999 “It was in the kitchens at Huntington that we started to declare some of our dishes “regional” food. This movement is now Australia-wide… I can still see Bob falling over with laughter when I said I would do the food if I could do regional food.”

Michael Manners has been a regular in the Festival kitchens.

Kim Currie 1994-2008 “When Pete Howard first asked me to partner him on the Festival I said primly “I’m not sure I’m prepared to compromise my standards in order to mass produce food.” Luckily Pete just sucked in his breath, bit his tongue and got on with the task of whipping me into shape.” Kim’s latest culinary venture “The Zin House”, is open at weekends on Tinja Lane, Mudgee.

Edwena Mitchell, 2009 – 2016 possessor of the finest pair of pins west of Sydney and with a bark that is definitely worse than her bite has proven to be a wonderful addition to the team. Improvisation and creativity continue to rule the day, in makeshift kitchens under the crusher awning, utilising pallets of bottles and wine crates for walls, shelving and bench-tops and shipping containers as cool rooms. Philosophically aligned with her predecessors, Edwena believes in seasonal first, local second and fresh is best. Everything is hand-made by the staff with nothing pre-packaged or frozen. Her big flavours in elegant combinations are perfect Festival fare and defy “mass catering” constraints.